When I was in my early teens all the cool kids at school wore Oz jeans. Unfortunately, they were about 25 bucks a pop and my seasonal lawn mowing job didn’t allow for such extravagance.

Back then there were jean stores where one could buy the hip new styles. One such store was a few blocks from our house, and I’d beg my mom to stop in so I could try on a pair of the bell bottom Oz jeans. This was the only thing that stood in the way of me gaining acceptance into the cool kids group. It was the secret handshake.

Up until this time my jeans were purchased from the most un-cool store on the planet: Sears. When I think of Sears I think of Kenmore washers, dryers and vacuums and browsing the bra section of the giant "Wish Book" catalog they printed each Christmas. It was the last place any kid would look to purchase jeans.

The Sears branded jeans were called "Tough Skins" which added to their un-coolness. According to Sears archives, they were made of Dacron Type 59 polyester, DuPont 420 nylon, and cotton and were guaranteed to last longer than your kid would fit into them. "Tough Skins" sounds like something Evil Knievel should be wearing instead of a young boy who is merely trying to avoid getting beat up because he wears boot-cut instead of the cool kids approved bell bottom jeans. 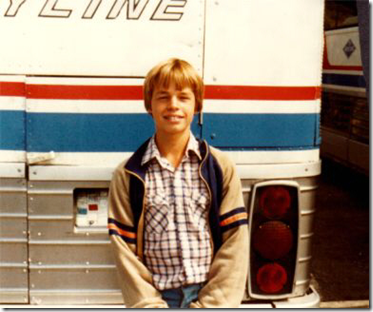 Here I am in San Francisco sporting a Sears ensemble including jacket, western shirt and "ToughSkins"

After many attempts, my mom finally gave in and stopped at the jeans store. I felt like Charlie getting his first glance inside Willy Wonka’s Chocolate Factory. I couldn’t believe my eyes as I took in all the jeans stacked floor to ceiling. I told my mom I wanted the widest bell bottom jeans I could find for $25. I tried on a number of cuts and sizes until I found the pair that would guarantee my entry into the cool kids group. I believe they were 30 bucks and my mom kicked in five bucks to cover difference.

I was so excited to wear my jeans to school the next day that I wore them to bed. I woke up the next morning and went off to school where I made sure to walk up the down the halls as much as possible so everyone would notice my hip jeans. I’m not sure what I was thinking but I figured, at some point, I’d be approached and invited into the cool group. An initiation was sure to follow.

But nobody said anything to me that morning. Or that afternoon at lunch. Or during recess. Or when I’d bend down to tie my shoe every 10 minutes.

I was bummed out as I left class to walk home with my friends. When one of them saw me he said, "What’s up with your pants? I can’t even see your shoes".

Membership in the cool club would have to wait another year.

4 thoughts on “How Not To Be Cool”