With most of the school supply shopping out of the way, Luca sat next to me at the computer as we searched for something to carry all those supplies. We reminisced about the pink Nike backpack I bought her for Kindergarten. In the subsequent years, the kids have carried their homework to school in bags I collected by attending various technical trade shows.

Luca has outgrown the color pink. That’s what happens when one has a little tomboy in them and leaves Kindergarten and Dora the Explorer behind.

Our chat lead to Luca asking me about what I used to carry to school. I went to garage and pulled out a number of bags I’ve used over the years.  Here are three of my favorites: 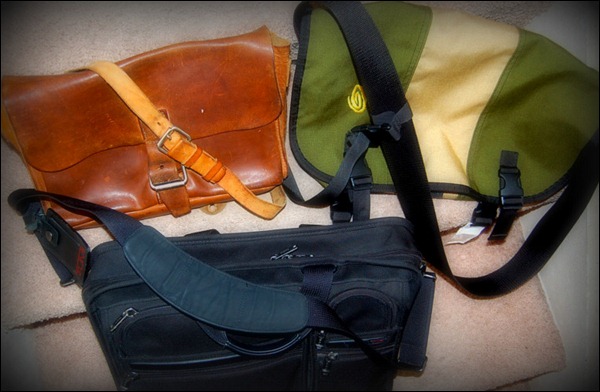 The black bag in front is the one I currently carry to work each day and have owned for three years. It has the most features, is the best-made, and most conservative bag I’ve carried. It’s also expensive by my standards. But the last bag of similar quality lasted me for 10 years so I feel like it’s a good investment. It has several compartments, my favorite of which holds my sunglasses case. The handles and shoulder strap are covered in high quality leather and the fabric is made of ballistic nylon which means it’s nearly impossible to rip or scratch. It’s made by Tumi and I expect it will last for many years.

The green and beige messenger bag is made by Timbuk2 which is a little San Francisco shop that’s famous for making some of the best bike messenger bags you can buy. I bought this bag in 2000 when I worked in downtown Seattle and rode a Xootr kick scooter around the city. I needed a bag that fit over my shoulder that I could fasten to my waist. And since this is Seattle, it had to be waterproof. My favorite features of the bag are the two Velcro fasteners (not seen in picture) that secure the large flap without having to secure the straps. The bag is very well-made but not ideal for carrying around anything heavier than a book or two and and iPod. I paid about $65 for the bag and it still looks brand new after ten years.

The last bag is my leather messenger bag I purchased in Germany in 1987. It has the fewest features of any bag I’ve owned. It also requires a lot of maintenance. Over the years, I’ve rubbed many containers of mink oil into the thick leather which keeps it soft and waterproof. I’ve had to take it to a number of shoe repair shops to have a seam or two stitched up. When I carried it around the University of Utah campus, my friends called it the ‘man-purse’.

My kids were not sure what to make of it when I showed them how I wore it around my neck and over one shoulder. I told them how I carried this bag from door to door as a missionary. It was just large enough to hold four Books of Mormon, my wallet and Geistliche Ausweis (license to preach).

This bag is one of my most priceless possessions. I had it with me during some of the darkest times of my life, but also during some of the most joyful. It’s full of personality. Like the large scratch across the back that came when I removed it just in time to swing and stun a dog that had been chasing me down the block. I carried letters from my parents and grandparents in the front pocket. It wasn’t uncommon for me to read those letters while taking the train from one city to the next, and they provided a much needed boost when I needed it.

I was surprised to see my kids demeanor change. They were no longer making fun of this strange looking and well-worn leather bag. I retrieved a rag and mink oil from my drawer and began rubbing the oil into the bag  just as I did 23 years ago.

I remember wanting it for my birthday, but having to wait a few weeks later for Christmas when my parents and grandfather would send extra money. I got to know the local shop owner well because I checked often to make sure the bag was still in stock while I saved for it. On the day the check from my father arrived, I rushed to the bank to exchange it into German Marks, but the dollar had weakened due to Black Monday. I went by the shop to ask the owner if he’d hold the bag for a few more weeks. I believe I had about 100 Marks and the bag was priced at 140 or about $80.

At the time, I carried a backpack I’d used during my first year of college. It was in decent shape, but I wanted something I could fling over my shoulder. I found wearing a backpack over a suit jacket was an awkward mix. I also wanted to integrate myself into the German culture a little more,  and wearing a bright blue American-made nylon backpack wasn’t helping with that.

The shop owner began asking me questions. My German was poor and my companion had to translate most of our conversation. I explained that I was sent to Germany to teach about Christ, and find opportunities to give service. He took the bag off the shelf and handed it to me. I began to explain that I would give him 50 Marks to hold the bag until I was able to come up with the remainder. He took the 50 Marks and said something to my companion.  As we walked out of the store, he explained the store owner had sold the bag to me at his cost.

5 thoughts on “A Bagful of Memories”