We visited the Woodland Park Zoo near downtown Seattle this afternoon. The temperature was in the 70’s, the sky was clear and the sun felt great on my face.

We visited a number of the exhibits. The kids loved watching the howler monkeys climb up high in the trees and make goofy but very loud noises. My favorite exhibit was the birds of prey area. Several times during the day the zoo brings out a person to show and talk about the different birds. Today he brought a Peregrine Falcon. What an awesome bird! That tiny red spot near the falcon’s mouth is a piece of meat the handler had just given her. 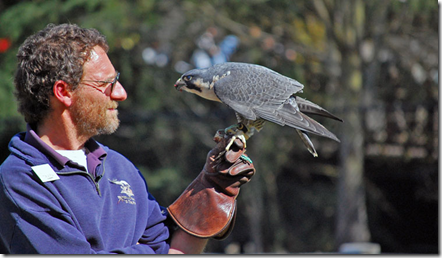 Here’s what I learned about this magnificent bird:

Watching today’s show made me want to return to learn about the other birds of prey. Well worth the visit, but call ahead to confirm exhibit times.